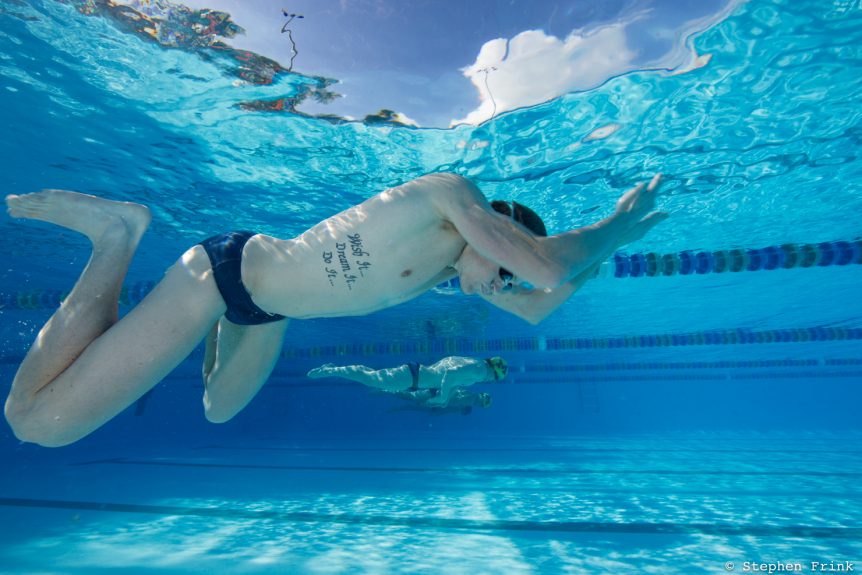 In case you missed Part I of this series, [CLICK HERE] to catch up.

As we discussed in our latest blog post, there’s really TWO places swimmers can put their dolphin kick in during a Breaststroke Pullout:

Once again, here’s the velocity chart for a swimmer’s average speed during a pullout without a dolphin kick:

What this means is essentially placing the dolphin kick at the end of the arm pull down phase will cause an INCREASE in velocity, but not as significant as if we initiated the kick during the glide phase (where the starting speed is already higher). Let me chart this for you:

Velocity Chart with Kick at the end of Arm Pulldown Phase:

Velocity Chart with Kick at the end of Glide Phase:

The easiest way to understand why putting the dolphin kick at the end of the glide phase is to look at a swimmer’s average overall speed and average speed during these two phases itself:

Average speed with Dolphin Kick initiated at the end of the Arm Pulldown Phase: 2 m/s

Average speed with Dolphin Kick initiated at the end of the Glide Phase: 2.5 m/s

What these four metrics tell you is that is better for swimmers to perform their dolphin kick at the end of the glide phase, where their speed is slowing down from their second highest peak velocity. By performing the dolphin kick at this point, they will not only increase their speed during that portion of the pullout, but their average speed throughout entire pullout increases too!

Want to read on?

[CLICK HERE] for Part III of this series, where we discuss how to minimize your drag components during your Breaststroke pullouts to give you the HIGHEST, average speed possible!

The Missing Link in Your Butterfly!