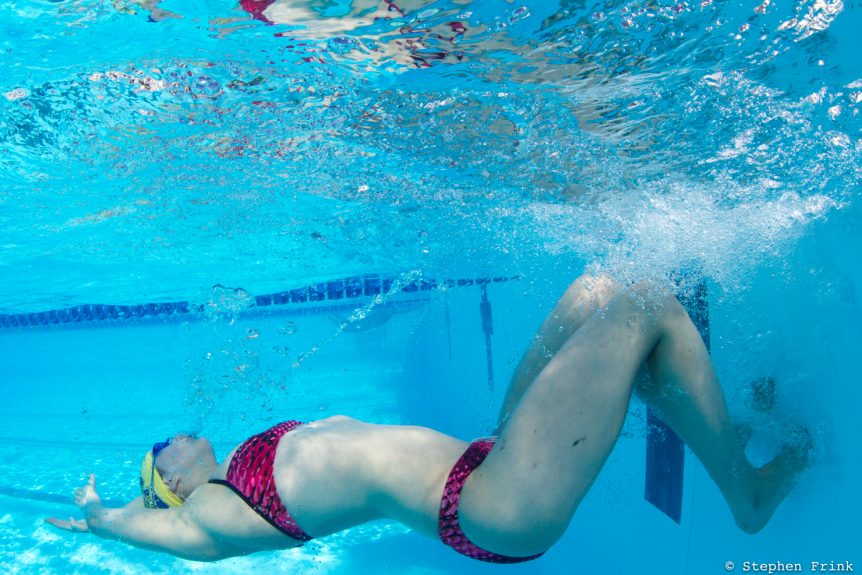 Welcome back to our last and final segment on Freestyle Flipturns! I know we took a 2-week hiatus, so if you can’t quite remember what Part II was about–[CLICK HERE] for a refresher!

In Part’s I and II, we discussed the approach into the wall and the turn at the wall. This leaves only one major portion of the flipturn left—the breakout. Today, our goal for this post is to help you understand how to maximize your push-off speed from the wall, while minimizing your drag during your transition to the surface!

From this position, there is really a few options for a swimmer:

Let’s dig deeper into all of these:

1. Push-off and Get to Your Stomach ASAP

While this push-off was taught back in the the 90’s, this type of push-off actually includes the highest amount of variability. This is strictly due to the fact that as a swimmer pushes off the wall, they immediately start rotating their body as quickly as possible to their stomach. With this, it provides a ton of opportunities for the body to get out of alignment while streamlining and change the direction of where the body is heading.

2. Push-off and Get to Your Side ASAP

Also this push-off and push-off #1 may promote your swimmer to start flipping and rotating at the same time. So instead of planting their feet with their toes and knees pointing straight up towards the sky (in the squat position), you will have some swimmers that will start rotating their body, so it is already half-way rotated to their side they normally rotate to in a streamline. This is another way that both of these push-off options add variability to the direction and ultimately, their streamline speed.

3. Push-off and Stay on Your Back

This type of push-off is my personal favorite, because it minimizes the amount of variability within a swimmer’s underwater streamline. As long as a swimmer plants on the wall in a squat position with their toes, knees, and belly-button pointed up towards the sky, and their hips and knees at 90-degree angles—they should push off straight from the wall. Basically, as long as a swimmer plants well on the wall during the somersault, they will have a consistently straight push-off.

For younger kids, pushing off the wall and not going out to any extraneous angles is important. As your swimmer’s progress and get faster, choosing push-off options #1 & 2 become more and more feasible. All in all, it’s best to start with having your swimmer’s push-off the wall and stay on their backs for a kick or two, before rotating to their side, then eventually their stomach!

What about Underwater Dolphin Kicks?

As far as the underwater kicking portion of the breakout, I like the sequence 1-2-#. What this does is it promotes a kick on every portion of the rotation when a swimmer pushes off and stays on their back!

Also, I know there is a lot of talk out there about underwater dolphin kicking on your back being faster than your stomach, and it is true. So feel free to adjust this sequence –as you see fit (just not for your IM races  ).

After the underwater dolphin kicks are completed. A swimmer must go through the breakout itself. Here are 3 key technical points to it that I like to tell my swimmers to focus on during their breakouts:

1. Start Your Pull before you Break Through the Surface!

Just as if you were still in a streamline, as you begin your first pull—you want to keep the other arm straight and pushing forward for as long as possible. What this does is promotes the arm to stay straight (in a half streamline), while the body is still underwater the water for a few more tenths of a second. This helps minimize any drag that may result from bending the elbow or relaxing the arm itself, when the breakout just started!

By tucking your chin during the breakout, it helps the swimmer keep their head down through the breakout and it minimizes their frontal drag (i.e. their bow wave)–for as long as possible. Also, it promotes great head positioning during the first few strokes of Freestyle too!

Not sure what your “bow wave” is, [CLICK HERE] to learn more!

Overall, a flipturn is not easy. There are multiple technical components to a flipturn: the approach, the turn, and the breakout–that can significantly slow a swimmer down. On the flip side, a flip turn can actually be one of the fastest points of a swimmer’s race—if done correctly.

As you work through perfecting your flip turn, pay attention to the finite details, as those smaller pieces can have a significant impact on your overall swim time!

The Missing Link in Your Butterfly!